Arrow Minerals Ltd (ASX:AMD) has consolidated its leading position within the gold-rich Boromo Belt in Burkina Faso through acquiring the key Tombi-Ouest permit for staged payments totalling $170,000 along with a 1% NSR.

The acquisition extends the Vranso Project and provides Arrow with a dominant position in the Boromo Belt, a subdivision of the world-class Birimian Paleoproterozoic Greenstones and host to numerous multi-million-ounce gold deposits in Burkina Faso.

Localised structural traps for gold have neem identified within a regional shear zone, and Arrow is targeting gold mineralisation using historical exploration data collected and analysed primarily with a base metal focus.

Arrow is proceeding with an aggressive exploration program to rapidly advance targets toward drilling in preparedness for the conclusion of the wet season.

“Knits together our position”

“We have consolidated an 80-kilometre extent of the Boromo Shear Zone that has primarily been explored for base metals, despite numerous indications of significant gold occurrences including artisanal workings and our discovery at Dassa.” 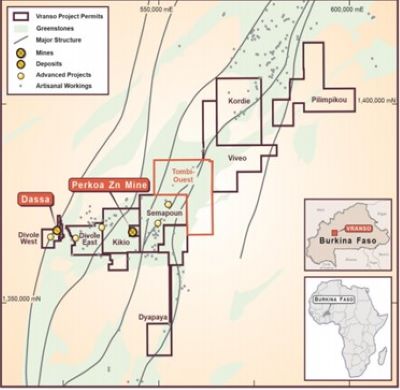 Vranso Project is 100 kilometres west of the capital of Burkina Faso, Ouagadougou, and consists of nine semi-contiguous exploration permits extending over 80 kilometres along the main NE-SW trending Boromo shear zone.

The addition of Tombi-Ouest Permit increases the company’s total land package to over 1,300 square kilometres of fertile gold ground.

Following the acquisition, Arrow is now in the unique position of evaluating a continuous 80 kilometres of a known regional structural shear zone to identify local-scale structural focusing of gold mineralising fluids.

Tombi-Ouest permit comes with a substantial volume of soil geochemistry, trenching and geophysical data collected with the discovery of base metals, primarily zinc, in mind.

The information generated and developed from this analysis will factor directly into the target development for the upcoming drilling program.

The ASX-lister will combine this information with the extensive historical data recently obtained as part of the Trevali agreement to form a coherent image of the geology and mineralised systems that extend through the Vranso Project area.

Exploration teams are conducting regional stream sediment geochemical surveys in the northern permits, Pilimpikou, Kordie and Viveo and auger soil surveys to the south on the Dyapya permit.

The company expects results from these surveys to be available within the next two months.

“We are integrating historical information with our modern data and examining the 80 kilometres belt as one expansive project.”

As a result of all these activities, the company, at the end of the rainy season, will be positioned to aggressively undertake a diamond and reverse circulation drilling program targeting new gold systems in combination with expanding upon the already identified deposits at the Dassa and Pao prospects.

Vendor Agri-Bio retains a 1% NSR which Arrow can purchase for a one-off payment of US$2 million.