AMD also announced that it had secured funding for augur drilling at its Hounde Project, also in the region.

Work during the December quarter has set the company up for a busy March period, which will include further drilling, sampling and the release of assay results.

At the end of the quarter, the company had $1.4 million in available cash.

A good start at Vranso

AMD kicked off the first phase of a major exploration program on multiple high-quality targets at the Vranso Project in the December quarter.

The targets were defined following a comprehensive review of data from the entire project area comprising 1,300 square kilometres of the prolific Boromo Belt.

This project is made up of 10 semi-contiguous exploration permits extending for more than 80 kilometres of the richly gold endowed Paleoproterozoic Birimian Greenstone Belt.

The area, which is yet to be evaluated using modern gold exploration techniques, is host to numerous multi-million-ounce gold deposits including Bissa, Bouly, Poura and Batie West.

It is expected the program will take six months to finish is and will focus on generative targeting and drilling of targets within trucking distance of a centrally located mill.

First phase exploration assays are due in the coming weeks.

Breaking down the work 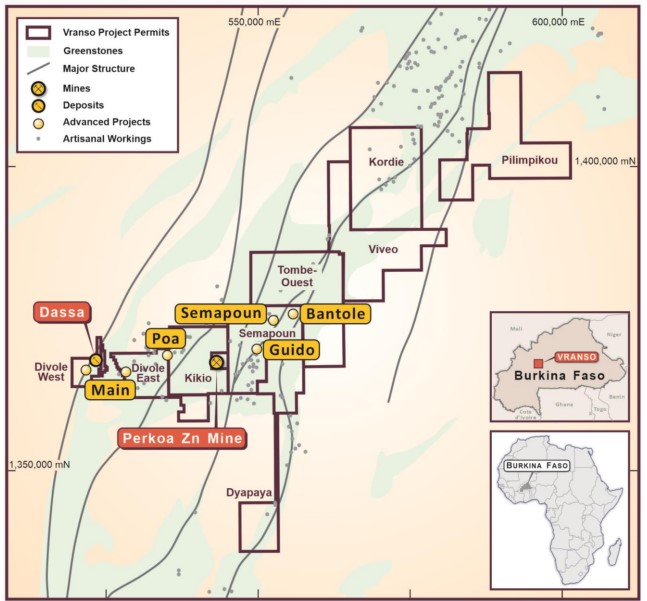 Arrow discovered the Dassa Deposit in 2020, less than 20 kilometres from the central Perkoa Zinc Mine processing facility and it features two higher grade zones of gold mineralisation, both of which are shallow, consistent, and mostly in the shallow oxide zone.

The Dassa North and Dassa South mineralised zones extend over 1,000 metres and 600 metres respectively, and are both open along strike and at depth.

Work at Guido comprised 19 RC drill holes (2,288 metres) designed to validate the historical Guido gold resource and test for where the resourced can be increased down dip and along strike.

The Guido Prospect lies 7 kilometres northeast of the Perkoa Zinc Mine processing facility and is accessible by an all-weather sealed road.

Blackthorn Resources Ltd initially identified and drilled the Guido gold deposit in 2010, reporting a maiden inferred mineral resource of 4.1 million tonnes at 1.06 g/t at a 0.4 g/t cut off for 139,000 ounces.

The Semapoun Prospect is 3 kilometres along strike from the Guido deposit within the structural corridor defined by the main Boromo Shear Zone.

Surface geochemistry and geological structural mapping have been ineffective in defining the distribution of mineralisation due to thick lateritic cover extending over the area.

Compilation and analysis of historical data revealed significant potential at the Bantole Prospect, 5 kilometres northeast of the Semapoun Prospect and just 16 kilometres from the Perkoa Zinc Mine processing facility.

A single northwest-southeast trending line of historical aircore drilling, penetrating to the base of weathering, intercepted shallow anomalous gold mineralisation (>0.3 g/t) over a 200-metre zone no deeper than 20 metres.

Elevated gold in stream sediment geochemical samples, collected directly to the northeast of the aircore traverse in the recently acquired Tombi Quest permit, indicate that gold mineralisation continues in this direction.

Additional auger drilling, geological mapping, and structural interpretations will now be done to rapidly advance the northern extension of the Bantole Prospect toward drill-ready status. 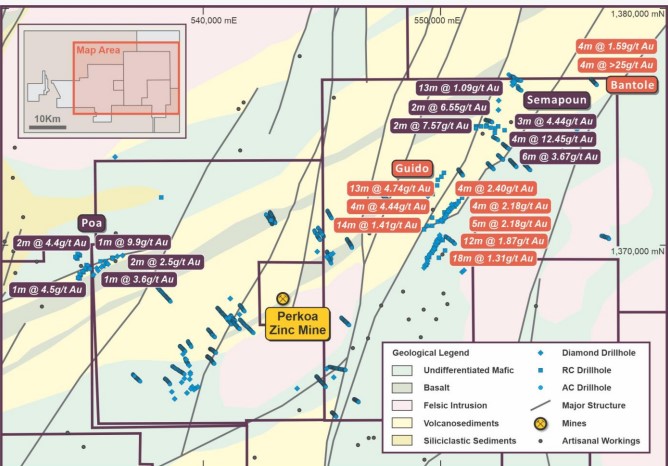 The fruits of AMD’s labour will soon come to light via assays as it also ramps up its work program.

Soil geochemical samples (1,054 in total along 800-metre lines and 50-metre centres as a first pass) were collected along a 10-kilometre mineralised NE-SW structural corridor extending from the south of the Guido Prospect to north of Semapoun.

The program is designed to identify the higher tenor gold zones within the structure and sub-parallel mineralised systems beneath cover.

Stream sediment geochemical sample collection was completed on the northern permits, 222 sites were sampled in the Pilimpikou, Kordie and Viveo permits, to assist in vectoring in on gold-bearing catchments shedding from the surrounding high ground and identify areas where prospective greenstones have not previously been identified.

A geophysical contractor was engaged to fly a detailed magnetic and radiometric survey over the Vranso Project to improve planning and targeting of mineralised systems.

Fortuna has continued its program of auger drilling with infill over the most prospective areas.

Results are due in the March quarter.