Arrow is also continuing to develop drill targets on its Nako and Boulsa projects in Burkina Faso.

Drilling is aimed at defining bedrock gold mineralisation under multiple shallow geochemical anomalies at Poa and will continue at the Dassa deposits at Divole West where shallow mineralisation remains open down-dip.

A drilling program of further shallow targets on 100%-owned ground is also planned and subsequently on the permits to be explored through an agreement between Arrow and Trevali Mining Corp (TSE:TV) (OTCMKTS:TREVF).

Drilling is expected to continue through quarter four 2021, pausing only during the rainy season to ensure safe and efficient operations. 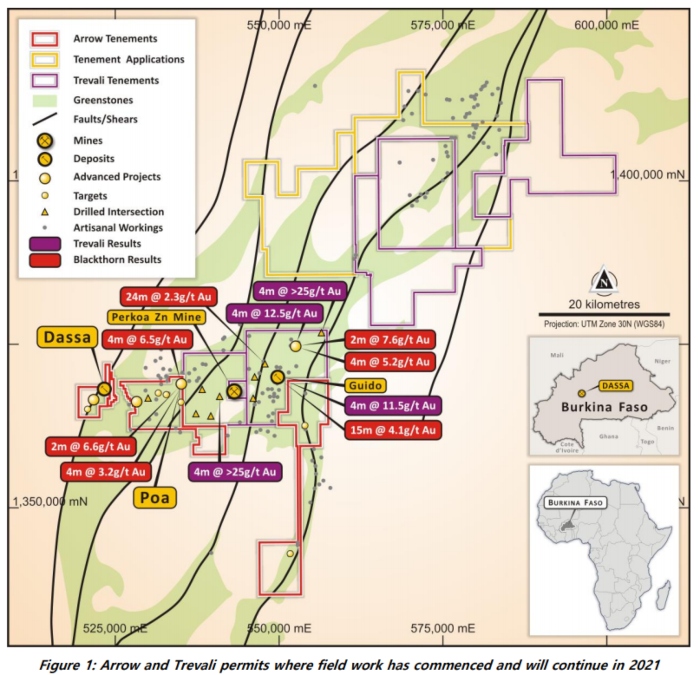 “This plethora of gold positions, just kilometres from Arrow’s Dassa gold deposit puts us in a position to unlock value systematically and rapidly in this underexplored and highly mineralised gold district in western Burkina Faso.

“Arrow is now well-positioned with drill-ready targets, an experienced team in place, and a sound financial footing to allow an aggressive and effective field programme to continue in the coming months.”

Arrow has completed 16,343 metres of RC drilling to date on the Burkina Faso exploration permits with success in discovering and advancing several projects including the definition of the Dassa deposit on the Divole West Permit.

The company has analysed all historic exploration data from its exploration work as well as data from the Arrow-Trevali JV permits by Trevali and the previous landholder, Blackthorn Minerals.

This analysis prioritised numerous high-quality drilling targets, including the Poa target, on the 100%-owned Divole East permit where drilling is underway.

Poa will be one of the first targets to be tested in this program.

Drilling to extend through 2021

Drilling at Poa, Dassa, the Arrow-Trevali permits and other Arrow targets is planned to extend through the end of 2021, with a brief pause expected during the seasonal heavy rains in quarter three.

Exploration results from this exciting program will be released as they become available.

While work continues on Arrow and adjacent Arrow-Trevali targets, the company is continuing to develop drill targets on its Nako and Boulsa projects in Burkina Faso.

Concurrently in Western Australia analysis of samples from recent drilling at the Strickland volcanogenic massive sulphide (VMS) copper-gold project is in progress.