The shallow, mostly oxide-hosted gold mineralisation is continuous along strike and to a depth of more than 150 metres

New broad, high-grade results confirm that the shallow, mostly oxide-hosted gold mineralisation is continuous along strike and to a depth of more than 150 metres. 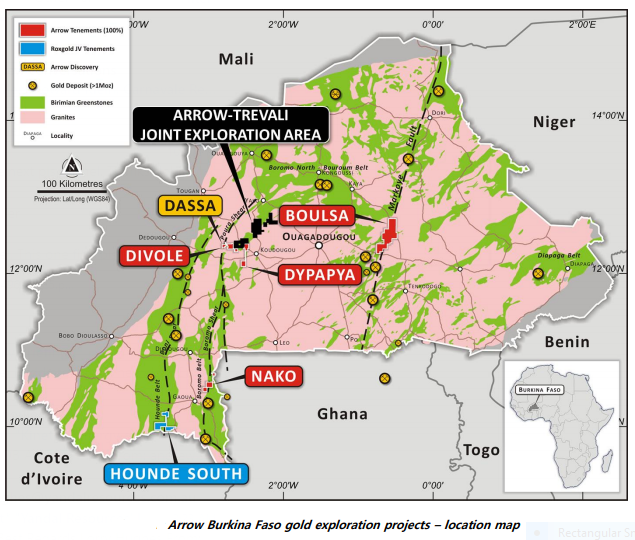 Arrow managing director Howard Golden said: “These very positive results at Dassa give us confidence that the Dassa gold deposit has the continuity, grade and thickness that we were hoping for.

“This puts us in a position where we can continue to expand Dassa while advancing several nearby advanced and early-stage projects to realise an emerging gold district in western Burkina Faso.

“Confirming the mineralisation potential at Dassa is particularly significant in light of the recently signed agreement to explore on a contiguous permit block held by Trevali Minerals."

Trevali exploration to start next quarter

“Arrow intends to commence exploration programs on the Trevali tenements in the second quarter of 2021.”

The recent drill program was focussed on the northern Dassa mineralised zone at Divole West permit in Burkina Faso and was undertaken exclusively in the northern of two gold-bearing zones.

Work completed comprised infill RC drilling between existing widely spaced RC profiles as well as drilling to extend the gold mineralisation to the north, south and down-dip to the east.

The latest program has tightened the drill section spacing on the northern Dassa zone to 80 metres and successfully defined a 900-metre-long zone of near-surface gold mineralisation locally exceeding 20 metres, but more typically 5-15 metres in thickness.

Mineralisation has a shallow east-dip and occurs along the sheared contact between sedimentary rocks and an underlying granitic intrusion.

Dassa remains open downdip and to the north, with scope to expand shallow, potentially open-pittable mineralisation.

Weathering typically extends down to around 50 metres depth, and many of the existing intersections sit in oxide material.

The drilling in the northern Dassa zone, plus the additional mineralisation in the southern zone, bodes well for a substantial volume of gold mineralisation on the Divole West permit.

With the Arrow footprint expanded to include a significant portion of the Boromo Belt, the highly encouraging results from Dassa provide the confidence and understanding of the mineralisation to unlock the potential of this emerging gold district.

The upcoming quarter will see an expanded program to grow Dassa and the known mineralisation at nearby Divole East, as well as accessing the huge potential of the 80 kilometres long Trevali block provided by the recent agreement.