Arrow has expanded its land position in the gold endowed Boromo Belt five-fold.

The expansion provides Arrow with protracted exposure to the world-class Paleoproterozoic Birimian Greenstone lithologies within the West African gold belt, increasing its exploration tenure from 214 square kilometres to 1,216 square kilometres, and consolidated the strike length to 80 kilometres.

To complete the expansion, Arrow and the Trevali Mining Corporation executed a formal exploration joint venture agreement. This provides Arrow with gold exploration rights on Trevali’s exploration permits, the majority of which have not been exposed to modern exploration techniques specifically targeting gold.

Arrow’s managing director Howard Golden said: “The Boromo Greenstone Belt hosts some of the largest gold deposits in Burkina Faso, exemplified by the multimillion-ounce Bissa and Bouly deposits to the north and Poura to the south.

“This agreement with Trevali gives us access to over 80 kilometres of the belt that has historically been explored almost exclusively for base metals.

“This portion of the belt has seen historical gold exploration that only scratched the surface but yielded high-grade gold anomalism.

“We have a successful team on the ground as demonstrated by the discovery of the Dassa deposit and they are excited and highly motivated by the opportunity presented by this agreement.” 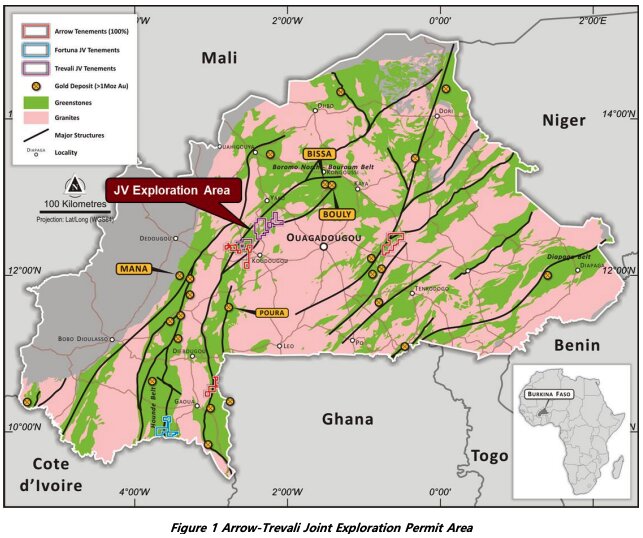 Under the joint venture agreement, Arrow secures the right to perform gold exploration over the Trevali permits along the Boromo Greenstone Belt, in exchange for a 51% interest in any gold resource that is defined on Trevali’s permits.

In turn, Trevali may now undertake base metals exploration on Arrow’s permits in the West African country, while Arrow can receive a 51% interest in any subsequent base metals mineral resource.

If Arrow discovers base metals on a Trevali Permit, Trevali will pay to reimburse Arrow an amount that is two times the amount of Arrow’s exploration costs and Trevali will grant a 2% NSR royalty to Arrow when mined, and vice versa.

Both companies will share exploration data as they hunt for precious and base metals on each other's properties.

Ultimately, the agreement positions Arrow to expand on the success generated by the Dassa gold deposit discovery at the Divole West tenement.

Arrow has since started integrating the extensive geochemical, geophysical and geological data collected since 1982 into a comprehensive single dataset.

This integration also includes re-logging and re-assay of many historical diamond drill holes that have not been examined with gold discovery in mind.

Parallel to this, the company’s in-country exploration team has also started fieldwork.

The explorers are applying advanced geophysical and geochemical techniques which, when combined with the historical information, will allow Arrow to rapidly vector in on the highest priority gold targets, maximising the potential for discovery success.