Arrow Minerals Ltd (ASX:AMD) has its sights set on unlocking the gold potential of the Boromo Belt in Burkina Faso and is ramping up exploration efforts on its 1,500 square kilometre project.

The company is focused on growing the known Dassa gold deposit and drilling several advanced targets, as well as working to define multiple high-quality anomalies for drilling.

Its objective is to define a critical mass of gold mineralisation in a small radius around highly prospective structural locations along the Boromo Belt.

The bulk of the work will be near Dassa, with concurrent regional definition along a newly acquired > 85-kilometre portion of the fertile Boromo Greenstone Belt, now accessible through a combination of 100%-owned permits and a recent binding term sheet to enter into a JV with Trevali Mining Corp (OTCMKTS:TREVF) (TSE:TV) (FRA:4TI).

Arrow managing director Howard Golden said: “Arrow is preparing to launch an aggressive program to unlock the immense potential of its position on the Boromo Greenstone Belt in Burkina Faso.

“With two deposits in hand, 12 prospects already advanced with high-grade intersections and a large swathe of the greenstone belt ready for exploration, we have the luxury of a target-rich environment in which to work.

“The collection of drilling and other enabling data on our significant portion of the belt will be a priority for Arrow for the remainder of the year.” 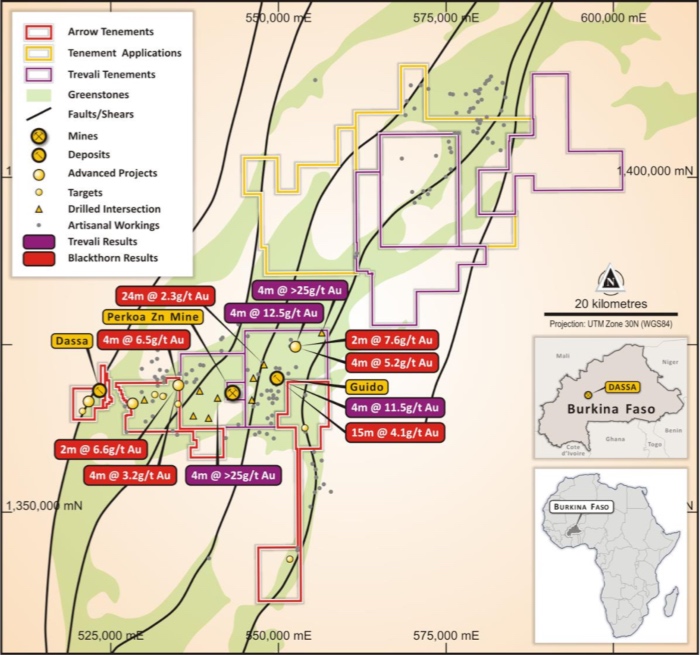 Boromo Belt with Arrow permits, Trevali permits and targets for 2021.

From 2009 to 2012 Blackthorn Resources explored for gold on permits currently held by Trevali and included in the recently signed JV agreement with Arrow.

Results from RAB, RC and diamond drilling include:

Trevali has also advanced work on their permits for gold as well as base metals, with RC drilling defining numerous high-grade zones for follow-up including:

The results from the Trevali JV permits, combined with the Dassa and Dassa South deposit and mineralised zone respectively, and the Divole Main and Divole Fold nose zones already comprise a large gold-bearing district.

When added to the regional prospectivity across the Boromo Belt to be explored by Arrow it represents a very large and productive exploration space. 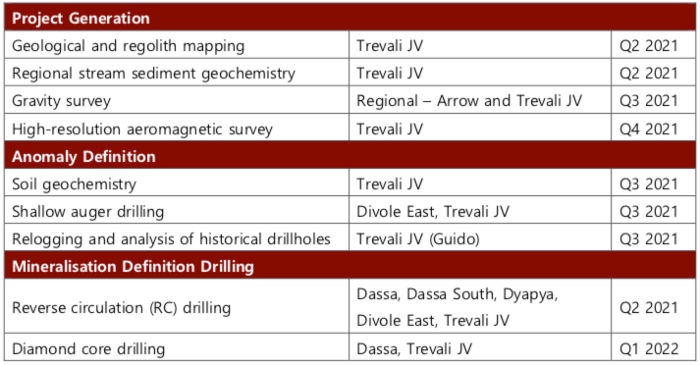 The company is progressing towards its goal of consolidation of several advanced projects and deposits into a unified mineralised district.

Work proposed for the coming 12 months includes all stages of exploration to advance the many existing high-quality targets along the Boromo Belt, as well as regional studies to deliver more targets for testing.